Afghan President invites Indian businessmen to invest in his country

The President of Afghanistan H.E. Hamid Karzai leading a high level delegation from his country, consisting of Afghan ministers of Foreign Affairs, Commerce & Industries, Mines, Information & Culture and their National Security Adviser  interacted with the Commerce & Industry Minister, Shri Anand Sharma and business leaders from India at a meeting in Mumbai.  Welcoming the Afghan delegation, the Commerce Minister said India has committed over US$2 billion in developement assistance for a diverse range of projects including infrastructure development, power generation and building capacities in health and education in Afghanistan. 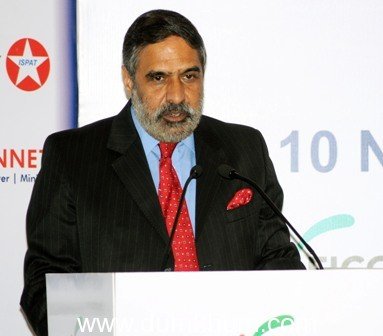 India-Afghanistan bilateral trade was structured by a Preferential Trading Agreement between the two countries which came into force in 2003.  The bilateral trade between our countries stood just over US$ 600 million last year.   However, with the growing exchange between business communities of both sides and the strong measures taken by the Afghanistan government for economic liberalisation. This can easily reach US$ 1 billion within the next 3 years. Afghanistan being strategically located at the cusp of a vibrant economic region,  India, views economic engagement with Afghanistan not just  in bilateral terms, but as part of a larger engagement in Central Asia. Afghanistan is home of one of the largest mineral resources in the world and  the Afghan Minister of Mines has been keen to promote Indian investments and technologies to tap the mineral reserves of Afghanistan.  It is in response to their invitation that a consortium led by Steel Authority of India has signed a Memorandum of Understanding for mineral development during the visit of President Karzai in October last year.   For a country which is moving on a path of development, creation of a robust infrastructure is a key ingredient.  India has been actively engaged in major infrastructure projects including construction of Zaranj to Delaram Highway facilitating movement of goods to the Iranian border.  India has also been engaged in construction of power plants and transmission grids across Afghanistan. Globally there is an increasing trend of enhanced regional integration.  The Minister appreciated CII’s role CII in bringing together investor community to look at Afghanistan as a land of new investment opportunities.

Speaking on the occasion, the Afghan President said his country was ripe and ready for Indian investment in mining and other sectors and invited Indian businessmen for capacity building in various fields in his country.