Aditya Roy Kapur and Parineeti Chopra have a language of their own in Dawat E Ishq !

Aditya Roy Kapur and Parineeti Chopra share an excellent rapport with eachother and they had a great time on the sets of their upcoming film Daawat-e-Ishq.‎

Aditya and Parineeti spoke in their own language. They both like to use new English words that are not heard of before. It is not exactly a code language but English and Hindi, only spoken in a different way. More like intellectuals with every sentence structured differently. The two used to use very big words for the simplest of things. 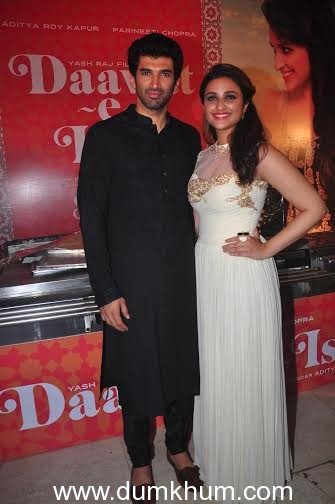 It was like a battle of new words between Aditya and Parineeti, to see whose vocabulary is more expansive and who speaks the language better. Both of them found it funny to see what kind of complicated words the other was using.

On one occasion Anupam Kher tried to join in but he was no match for them. He could not keep up with their verbal combat and contest.

Although the lead pair of the film had great fun, only the two of them found their witty game amusing, while they puzzled the others members of the cast and crew.