Elegance, grace, style and charisma in men’s fashion wear has been the highlight of Siyaram’s for decades. Keeping with their reputation to create things with a panache, the House of Siyaram’s unveiled its first-ever ready-to-wear fashionable Indian ethnic and lifestyle brand ‘Siya’ for women. The immensely popular style icon Parineeti Chopra has been roped in as the first brand ambassador for Siya women’s collection by Siyaram’s. Parineeti Chopra unveiled the new logo, collections & ad campaign of Siya for women by Siyaram’s in the presence of the management team and Mr. Kishan Poddar at a studio in Mumbai. Parineeti shot for Siyaram exclusively as the new brand ambassador. Siya’s eclectic range includes best of the finest pure fabrics designed to display elegance and brings out the real beauty of every girl. Priced from Rs. 700 onwards, Siya will eventually be available at thousands of outlets in all the cities across India similar to Siyaram’s wide network spread which is about 1 lakh outlets pan India. Mr. Kishan Poddar, Executive Director, Siyaram Silk Mills Limited, said, “The launch of Siya completes our ‘Fabric to Fashion’ portfolio of offerings and is in absolute sync with our motto of ‘Come Home to Siyaram’s’ because when we say Come Home to Siyaram’s we mean Come Home to Family. Our first-of-its-kind nationally available fashionable Indian ethnic and lifestyle brand will empower girls and women to have more variety and impeccable quality. The versatile, diverse and admirable designs will attract equal appeal and attention from urban as well as rural buyers. Siya is our gift and tribute to the Indian woman who is unique in every way. And we are confident that Siya will soon become a national-level mass appeal brand with admirers galore.” Mr. Harshit Poddar, Next-Gen of Siyaram’s added, “Siyaram’s has a history of being associated with some of the biggest names in Bollywood including Hrithik Roshan, Saif Ali Khan, Lara Dutta, Priyanka Chopra & sports stars like M.S. Dhoni, Leander Paes, Mahesh Bhupathi, and Borris Becker. Parineeti Chopra was an ideal choice for Siya’s advertising campaign because she is a popular icon who appeals to fashion-conscious girls as well as young-at-heart women. Parineeti Chopra is the exuberant girl of Indian cinema and at the same time a woman of substance who exudes the right style, amazing attitude and infectious appeal that we were looking for! We want every Indian girl to associate with Siya for its intrinsic Indian values that we portray and Parineeti is the perfect role model to project this through Siya.” 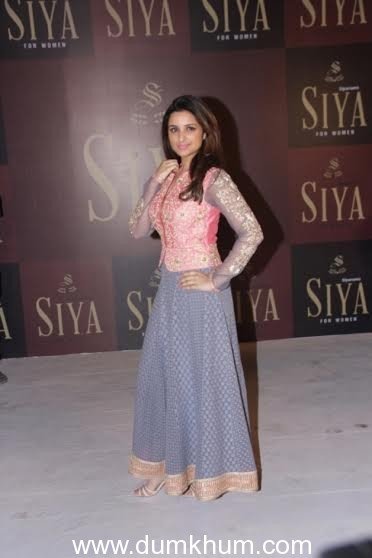 For over three decades, Siyaram’s has been delivering blended high fashion shirting & suiting fabrics. The designs & styles of its fabrics have had a rich & vibrant history of creating fashion trends. Siyaram’s is a leading Indian manufacturer of fabrics and its products are available through an unparalleled pan-India network. The company produces over 60 million mts of fabrics annually and has retained the crown of the largest Indian manufacturer of blended fabrics for a significant number of years. Its state-of-the-art manufacturing plants are located at Tarapur, Daman & Silvassa.