“Acting is my passion!” expresses Sidharth Malhotra on back-to-back awards! 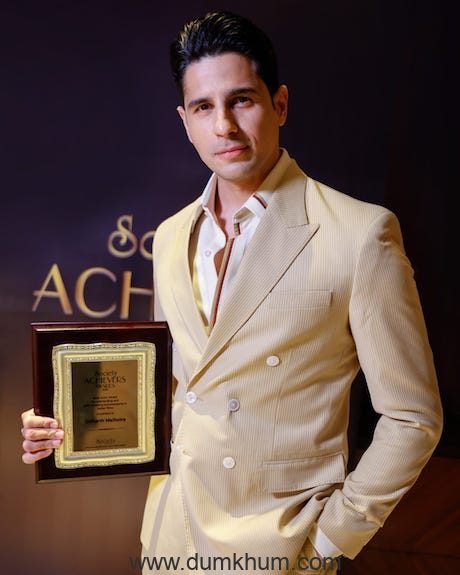 Sidharth Malhotra’s golden era continues as the actor wins yet another “Best Actor” award for “Outstanding and Pathbreaking Achievements in Indian Cinema.” He looked dapper in a suit and received the Award from the Hon. Chief Minister of Maharashtra, Sh. Eknath Shinde, and the Deputy Chief Minister of Maharashtra, Sh. Devendra Fadnavis.
Sidharth thanked the dignitaries who presented him with the Award, saying, “It is so inspiring and encouraging to see you promote talents from all different fields and represent them.” He shared a little banter with Sh. Devendra Fadnavis said, “I hope we meet every week, and I receive awards like this.”
Sidharth struck a chord with his subtle yet powerful performance in Shershah and thanked his fans for their never-ending support. He also stated that they have always encouraged him to work hard.
Sidharth concluded his speech by saying, “Acting is my passion.” He hoped he would keep entertaining his audiences for years and find many more opportunities like this to come on stage. Many industry stalwarts and well-known artists present there greeted and congratulated Sidharth.
On the work front, Sidharth Malhotra will appear alongside Rashmika Mandana in Mission Majnu, Dharma Productions’ Yodha, and his much-anticipated collaboration with director Rohit Shetty on the show Indian Police Force. The shooting for the same is in full swing!