ACO 2014 – Cook Off with Rohan Bopanna and Aisam Qureshi at Foccacia, The Hyatt Regency, Chennai Known for their amazing team work on court the Indo-Pak Express Rohan Bopanna and Aisam Qureshi were pegged against each other in a different sort of competition that required cooking spatulas instead of Tennis racquets. 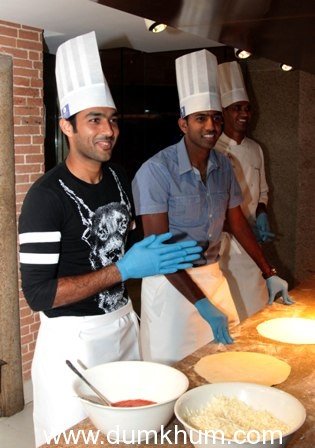 The Indo-Pak express went head to head at a cook-off that was held at Foccaia, The Hyatt Regency. The task was to cook a Pizza and Pasta each with three lucky patrons of Foccacia getting to taste and judge the dishes. It was a fun event that saw both the players come out of their comfort zone and give the patrons a dish to remember. It was a really close call as both the players put up some mouth watering dishes for the judges. The judges finally decided that Rohan was the winner yesterday evening.