Today more meaningful Marathi cinema has stepped out of Bollywood’s shadow and is going places. Marathi films are now nominated for the Oscars and Marathi artistes are winning National Awards. With the intention to continue to match the standards of International cinemas, Rajendra Talak Creations announced its movie ‘A Rainy Day’ with the team of quality technicians including Academy and several other awards winner Padma Shri Resul Pookutty. Resul Pookutty for the first time has shared his talent of sound designing to the Marathi film industry through ‘A Rainy Day’. This January 2014, the industry will witness a quality Marathi cinema ‘A Rainy Day’ announced today by Rajendra Talak Creations in the presence of its technical team. The captain of the ship, director Rajendra Talak has sphered headed the entire movie with his long sighted vision. Rajendra Talak started his carrier in film making in 1996 with a telefilm ‘SHITU’ followed by a first celluloid film ‘ALEESHA’ in 2004 which won the National Award, bilingual film ‘SAVALEE’/‘Antarnad’ (Marathi, Konkani) in 2006 which won five National Awards, Saavariyaa.com in 2008 and ‘O Maria’ in 2010.

A Rainy Day is a story of a go-getter and an achiever, Aniket (Subhod Bhave) who wants to be rich quickly. He would resort to any means in order to get what he wants including bribe people, entice them with immoral ‘gifts’ or even get people off his path. Aniket’s wife Mugdha (Mrinal Kulkarni) does not approve of his deeds. The story of the film revolves around corruption, Mugdha’s extra-sensory powers, their shattering married life and Aniket’s never ending desires. The team of professionals has come together with their expertise to make this movie a success. The film story, screenplay and direction is done by Rajendra Talak, produced by Rajendra Talak Creations and Iris Productions, while Director of Photography (DOP) is Sanjay Jadhav, dialogues and screenplay by Abhiram Bhadkamkar, Sound designer Resul Pookutty and Amrit Pritam Dutta, editor Vidyadhar Pathare, art director Ajit Dandekar, music is manned by Ashok Patki with the excellent lyrics by Saumitra and artists like Mrinal Kulkarni, Subodh Bhave, Ajinkya Deo, Harsh Chhaya, Neha Pendse, Sulabha Arya, Sanjay Mone and Manoj Joshi. 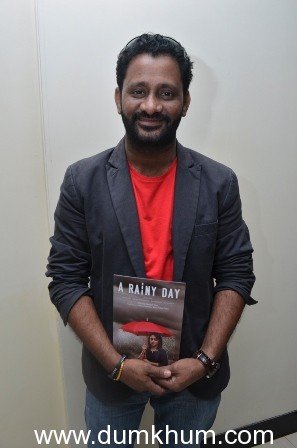 “Rajendra Talak Creations has formed a quality team of artist and technicians to complete the uphill task of ‘A Rainy Day’. This film is our small initiative to highlight the problem of corruption in the society and how it affects the families. We are looking forward with a confidence to offer the quality cinema to the industry and audience. Till date I’ve worked on several regional movies but now for the first time I’m working with such a great talents like Resul Pookutty and I’m grateful to him. I’m really excited about this movie and with the support of such a great team I’m certain that this movie will touch many hearts”, said director Rajendra Talak.