AS GUMRAH S4 LAUNCHES THIS SUNDAY, ON CHANNEL V 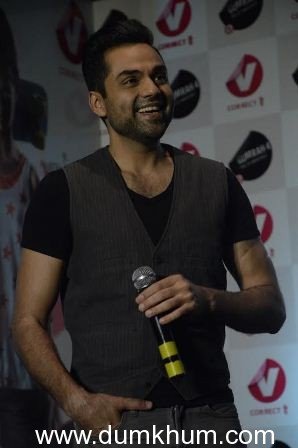 Bringing in the best of youth entertainment, Channel V announced the launch ‘GUMRAH – END OF INNOCENCE’ SEASON 4 with a panel discussion held on 26th August at Novotel, Juhu.  Starting 31st August at 1pm, the one-hour show will showcase 13 episodes one every Sunday.

In sync with the show’s theme, a panel discussion was held, throwing light on the Juvenile Justice Act Bill and the pressing and delicate issue of juvenile crimes. Featuring as panellists are prominent names including Bollywood actor Kabir Bedi, renowned author and yoga instructor, Ira Trivedi, Nishit Kumar- Head Communications and Strategic Initiatives at CHILDLINE India Foundation and shows host, Abhay Deol. The panellists from various different walks of life came together and gave their insightful opinions on the current scenario of adolescent criminal behaviour and the recent juvenile justice act bill. Interesting notes were exchanged and debated upon by the panellists at the press conference with an aim to help understand the concern of juvenile delinquency. In its fourth season, ‘GUMRAH – END OF INNOCENCE’ continues to endeavor to comprehend the psyche of teenagers and understand the stress and pressures of modern life on them. Each episode tells of a shocking tale of heinous crimes committed across the country by the innocent driven to a moment of insanity.

Season four will be hosted by the young and dynamic Abhay Deol, who in turn will be accompanied by a celebrity in each episode. With a huge fan-following, the young actor has been in a number of roles that often have young people associate with, making him an apt choice for Gumrah. Every hour-long episode in the new season will shine the spotlight on a celebrity who will take of a teen crime story that they have experienced or witnessed in the course of their lives. First launched in March of 2012, the show has emerged as a one of kind crime series on prime time television, as it is a first ever attempt at showcasing crime committed by the most unassuming section of society – TEENS. Telling the story behind the unprecedented rise in juvenile delinquency, the television show uncovers the plight of innocent young adults who turn criminals due to circumstances.

Though television serials showcasing prevalent evils in society are not uncommon, Gumrah through its multiple seasons has always given a new outlook to how crime is perceived by viewers.

Commenting on the new season of the show, Ajit Thakur – EVP and Business Head for Channel V said, “The show is about the youth, their tryst with crime and the circumstances which led to the incident, rather than sensationalizing the crime or the criminal himself. Over the years, the show has gained popularity with its exceptional content and execution and we are upping the ante this time around, hoping to really get the message across.”

Abhay Deol, Host – Gumrah Season 4 said “I’ve been a huge fan of the show and am excited to be a part of the greater message. Gumrah focuses on the thought that nobody is born a criminal but instead circumstances and certain unforeseen incidents take you down a bad path. The idea is to not only educate parents, families but also the youth.”

Gumrah S4 is produced by Balaji Telefilms. Tune in to watch as the mystery unravels: Gumrah – End of Innocence, starting 31st August, every Sunday at 1pm only on Channel V.

Reaching out to almost 50 million viewers every week in India, Channel V is the ultimate destination for entertainment in the country. Channel V has pioneered unique youth engagement initiatives since its inception. From the launch of the first reality show on TV – V Pop Stars, the soaring success of close to a decade for V Get Gorgeous, the launch of India’s first youth fiction, V Roomies and having 4 daily youth fictions to the hosting of India’s Biggest College Festival, V Indiafest ’10 and execution of it’s subsequent annual installments, Channel V is today known for creating innovative, award winning and cutting edge content and interactions that reflect youth passions. Continuing the legacy of being the market leader in its genre, the shows that are aired on the channel get themselves recognized by winning respected industry awards. Two of Channel V’s flagship shows Gumrah and The Buddy Project triumphed at the prestigious Indian Telly Awards, 2013 by winning the Best Non-fiction and the Best Fiction show respectively, thus confirming the channel’s status as the numero uno youth GEC. Channel V has also taken entertainment off-air in the form of IndiaFest – the biggest youth festival in the country touching and influencing 2 million lives every year. This news ventures are on the back of a deep understanding of youth behaviour through periodic bodies of research. On 25thNovember, 2014 Channel V went through a brand refresh launching 4 new shows across 4 genres and has grown by a 42%.

V strongly believes that mobile and digital is the next big thing and therefore as a brand it heavily invests in these platforms. With over 3.5 million unduplicated active users on Facebook, Channelvindia continues to gather more audience to engage with our online content. Innovation has been in the DNA of the brand and hence this year Channel V launched VithU – A mobile app for safety. The app has 1.2mn approx downloads on iOS and counting…

It has a leading presence in regional broadcasting as well, through a bouquet of affiliate channels which includes Star Jalsha, Star Pravah, Asianet, Asianet Plus, Suvarna and Vijay. Star India is a wholly owned subsidiary of 21st Century Fox.