Aarti Vijay Gupta presents a collection which is a tribute to (16th-19th century) – to be showcased in the coming LFW S/R 2014 !

All geared up to showcase at the upcoming Lakme Fashion Week Summer Resort 2014, designer Aarti Vijay Gupta’s brand new line has been inspired by “Indian Miniature Paintings” (1600-1800BC). This season, Aarti is taking her style files to the next level as she marries the past and the present in her eye popping new collection.

To give a glimpse into what’s in store — portraits and flora and fauna find prominent spaces on her silhouettes while elaborate use of fabrics such as Habutai Silk further complement the regal cuts and prints. From poetry to age old legends and mythology to ever changing seasons and moods of love, the designer has tapped every source to finally sift nothing but the best for her creations. Multi-functional silhouettes, these creations are distinct as they can be worn to a variety of occasions — evening dinners, formal outings, weddings and even when you want to let your hair down. 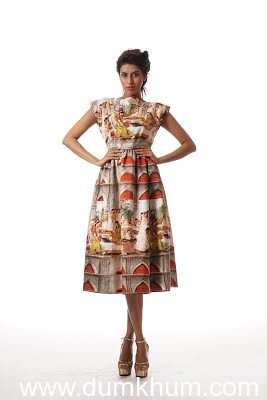 Young and talented, the designer has already made waves in the Indian Fashion Industry, earning the repeated praise and respect of not just high profile clients but fraternity members as well, who love to flaunt her designs. A young and bubbly entity, Aarti breathes life into her creations with her signature prints and cuts. Talking about her collection, Aarti Vijay Gupta says, “Pricely possessions are not meant just for the walls, now you can wear them too. Wake up to the actual art of dressing and adore yourself with silhouettes that will complement your personality”.

LFW’s Summer Resort 2014 will see Aarti Vijay Gupta complete her fourth season with the prestigious fashion week. Marking her international runway debut in 2010, the very talented Aarti captured every fashionista’s imagination with her sleek, quirky and at the same time elegant and captivating sense of design. Last season the dynamic designer’s collection titled ‘I Love Music’ was an ode to the resurgence of learning based on classical sources which is an amalgamation of art and music. Digging into the pool of her passion for music, Aarti’s creations — featuring musical notes and instruments on an array of structured silhouettes — received an overwhelming response and she is all set for a resounding encore.

True style is more than just about clothes and Aarti’s understanding of this philosophy has always resulted in head turning creations.

Details on the show :

Aarti Vijay Gupta graduated from the prestigious NIFT, Mumbai, bagging a position in the top 10 finalists of the CIAE International fashion awards. She launched her label in 2009 by debuting at the Dubai Fashion Week as the “Emerging Designer” and has never looked back since. Her strength lies in the contemporary functional clothing. Her debut lakme collection won her accolades from Fashion dignitaries like Fern Mallis and all the magazines Vogue, Marie Claire,  Verve, Grazia,The Week and Mercedes Benz magazine .And her Saree made to the list of best ethnic wear 2012 list by Vogue . Harpers Bazaar did special mention as the designer to look  forward to. Hi Blitz featured her as the Best Mens Resort wear Designer recently. Aarti sums up her thoughts and creative inspiration saying, “Whatever the genre – great fashion and music seeks to break boundaries – challenging expectations and inspiring you to see things in a completely new light. Which is why if you get the combination just right – it can become much more powerful than just merchandise: it’s a statement.”