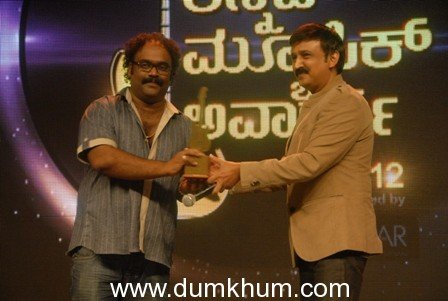 The second edition of the BIG Kannada Music Awards presented by GRT Jewellers and powered by Clear was held at a glittering and star-studded ceremony held yesterday at the Jnana Jyothi Auditorium in Bangalore. Conducted by 92.7 BIG FM – India’s No 1 Radio Network, the BIG Kannada Music Awards 2012 is an exclusive platform to acknowledge, applaud and recognize the versatile and outstanding talent of the Kannada music fraternity. The awards were adjudged by an eminent jury panel comprising of stalwarts from the Kannada music industry like Rajan (music director), V Manohar (music director) and Manjula Gururaj (playback singer). The ceremony was also blessed by the presence of some popular names from yesteryears such as actresses Jayanthi and Sudha Rani and big names from the world of music Manjula Gururaj, Ratnamala Prakash, Padmashree Kadri Gopalnath, B Jayashree, Harikrishna  and Ricky Kej. The function also featured some rising starts from the world of music; singers Akanksha Badami, Anuradha Bhat, Deepak Doddera, Chethan Sosca. The show was also high on the entertainment quotient, while the popular RJs Rashmi, Shruthi, Mayur, Rohit kept the crowd entertained with special acts, the show came alive by Yograj bhat and Srujan Lokesh hosting a segment, entertaining people with their witty repartee and funny one liners and also with performances by Aindrita Rai and Yogi who danced to popular numbers. The contemporary dance performances by the ‘Cool Friends Dance Academy’ wowed the audience, especially with the young kids performing and entertaining as much, if not more than the professionals! The icing on the cake, was the unplugged medley of classic songs performed by Akanksha Badami, Anuradha Bhat and Deepak Doddera accompanied by RJ Mayur and Somashekhar Joyce.