It was a day of celebration for 92.7 BIG FM, India’s No.1 Radio Network today as one of its marquee shows ‘Carvaan-e-Ghazal with Talat Aziz’ became the most heard show in Mumbai (highest time spent listening)! At the special celebration with the 92.7 BIG FM team, ghazal maestro Talat Aziz interacted with the press along with melody queen Shreya Ghoshal who was visiting the studios to record a special episode with him! Catch Shreya Ghoshal on ‘Carvaan-E-Ghazal with Talat Aziz’ on Sunday, 30th March at 9pm exclusively on 92.7 BIG FM! 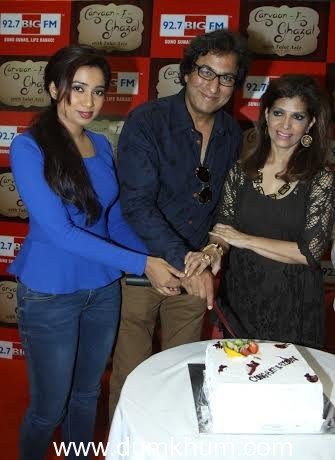 92.7 BIG FM’s ‘Carvaan-E-Ghazal with Talat Aziz’ is an exclusive Ghazal show which in a short span of just four months has become the No.1 show in its time band. To captivate its listeners with yet another exciting episode, 92.7 BIG FM has invited Melody Queen Shreya Ghoshal to the show. Shreya has established herself as a leading female playback singer in Indian cinema. She was only 16 when she recorded the song “Bairi Piya” with Udit Narayan for the film Devdas which won her national fame and several awards. Shreya’s talent has been praised by various musical personalities in Bollywood, including veterans and contemporaries. The special show will give listeners an opportunity to get more acquainted with Bollywood’s music icon and discover her musical journey to fame.

‘Carvaan-E-Ghazal’ is a first-of-its-kind show on radio that offers Listeners a unique opportunity to appreciate some of the most beautiful ghazals, qawwalis, sufi music and unheard-of stories behind them. On the show, Talat Aziz sahab plays specially chosen ghazals and shares a treasure trove of anecdotes and trivia from his own life and the music fraternity. The show invites celebrated artists from the music industry for special episodes. 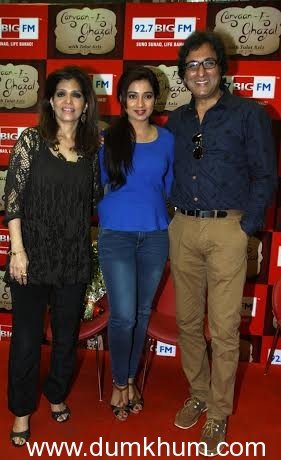