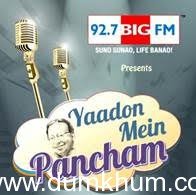 ‘Yaadon Mein Pancham’ to air a week-long special as run up to the legendary music director’s birth anniversary! R.D Burman fondly remembered as Pancham Da is known to be the most seminal music directors of all time. His life was all about tunes, melodies and his love for music. To celebrate his passion and dedication towards the art and his contribution to the music industry, 92.7 BIG FM celebrates the renowned music composer’s birthday by showcasing his vast repertoire of evergreen classics. Pancham da fans across 92.7 BIG FM stations will be treated to a unique on-air concert titled ‘Yaadon Mein Pancham’ every day from June 22 – 27, 2015 from 7PM – 8PM.

Singing sensations Akriti Kakkar, Kanika Kapoor, Tochi Raina, Benny Dayal and Abhinanda Sarkar will get together to pay their respects to the music maestro by performing unplugged on some of his best songs on-air through the week. Some of these include Dum Maaro Dum, Humein Tumse Pyaar Kitna, O Haseena Zulfon Wali, Rimjhim Gire Saawan, Piya Tu Ab Toh Aaja, Chura Liya Hain Tumne amongst others.

Speaking on the occasion, Ashwin Padmanabhan, National Business Head, 92.7 BIG FM said, “With R.D. Burman’s everlasting music spread across a broad spectrum of music lovers, it still rules the list of our favourites even after two decades. There is no better way to commemorate his birth anniversary than to have our musicians of the new generation come together to pay tribute to R.D Burman’s timeless music through an on-air concert on the country’s only retro music station 92.7 BIG FM, Hit Thee Hit Rahenge.”

The on-air unplugged concert will be supplemented by entertaining interviews with the artists by RJs across the 92.7 BIG FM network in India as they join in to make the concert all the more enjoyable for their listeners! Speaking on the occasion, popular singer Tochi Raina stated, “Pancham Da’s talent remains unmatched even today. I loved his style of music. He belonged to Tripura where there were a lot of jungles and any kind of sound fascinated him; that fascinates me because I believe that it explains his love for music and his desire to creating newer music. I feel privileged to able to pay a tribute to R.D. Burman and there is no better way than to sing his songs.” 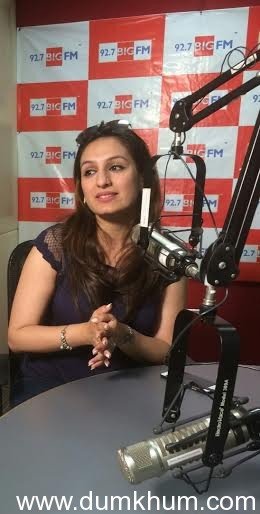 Aakriti Kakkar also expressed her excitement about being a part of the Yaadon Mein Pancham on-air concert, “I love Pancham Da’s songs. He has been an inspiration for my mother too who has done her Post graduation in Hindi Music and my entire family in general loves his songs. What I love most about his songs that anyone from any generation can listen to his music and relate to it. I am thrilled to be a part of Yaadon Mein Pancham here at 92.7 BIG FM.”

Right from his soulful collaborations with likes of Gulzar Saab and Kishore Kumar to folk tunes modernized with western rhythm instruments, his musical conceptions made what we today call the music universe. Baby Doll fame Kanika Kapoor expressed, “I had goosebumps when I began singing Pancham Da’s songs. They were a rage back then and even today, people across ages enjoy his music. No song of his was like another, the thought behind every song, the melody, the lyrics, the whole idea to be precise was different from another.  I’m extremely delighted to be a part of ‘Yaadon Mein Pancham’ and it is an honour to be able to pay a tribute to R.D. Burman. I would really like to thank 92.7 BIG FM for keeping retro music alive, the way they do.”

Benny Dayal who took the nation by storm with ‘Badtameez Dil’ professed his love for R.D. Burman’s songs, “Pancham Da’s greatest quality was that he made songs ahead of time. He brought the sound of Latin, a little bit of disco, twist, rock n roll and some tribal music to create a differentiated music library for aspiring singers and music enthusiasts alike. His songs are simple yet soulful. He made the most amazing peppy songs and in doing that created a sound for himself. I feel lucky to have been part of Yaadon Mein Pancham and relive my memories as I sing some of his best songs on-air.”

Reliance Broadcast Network is a media and entertainment company with interests in radio, television and television production. The Company houses: 92.7 Big FM – India’s No.1 FM Network with 45 stations, reaching over 4 crore Indians each week; Big Magic – which has built strong brand equity as a Comedy Channel and is positioned as the one stop destination for humor, with higher affinity in the Hindi heartland; Big Magic Ganga – the No. 1 regional Channel of Bihar and Jharkhand; Big Magic International – a channel targeted at the Indian Diaspora in the US and Canada; BIG Thrill – the destination for action entertainment; and Big Productions – its television content production division;