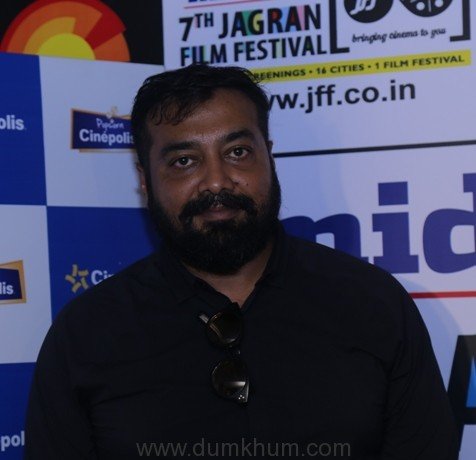 Following an impactful day, the 7th Jagran Film Festival took the movie aficionados with surprise as they were overwhelmed with watching iconic Indian and international films, to attending workshops and interacting with film wizards.

On day two, the films that were showcased and applauded by the movie buffs in the World Cinema section were two Spanish films, Habanastation and Zoe, directed by Ian Padron and Ander Duque respectively and also English film Pop Up, directed by Stuart McBratney, German film Hear The Silence, Portuguese film, Letter, directed by Sergio Graciano and Mexican-Spanish film Eddie Reynolds and The Iron Angels, directed by Gustavo Moheno.

For film aspirants, a session that featured revolutionary and renowned filmmaker Anurag Kashyap in conversation with Ajay Brahmatmaj was the highlight for its immense takeaways. Director-producer-actor Anurag Kashyap touched upon his journey as a filmmaker while also speaking about economics of filmmaking, film budget, taxes, number of screens, content films, acting, short films and venturing into bhojpuri cinema among others.

On his interest of attending film festivals, Anurag Kashyap said at the event, “It’s for my own survival. It has helped in my growth as a filmmaker and a producer. Personally, it helps me evaluate and expand my own market.”

Ritesh Shah, writer of recently released film Pink, has also graced the film festival. He revealed technical elements of script writing and motivated the aspiring writers. He shared his experiences of writing Pink, which took the audience by surprise.