63rd Macao Grand Prix to take over the streets of Macao! Macao has all the ingredients for a perfect holiday. Travel to Macao is easy as visa is on arrival, making it a convenient destination for travelers, especially those who love taking short spontaneous trips. Macao has the perfect combination of rich culture and festivities to soak in, which makes this country an ideal destination for adventure seekers. This year Macao has some truly unique and enthralling experiences to offer with the Macau Grand Prix being held this November17-20, 2016. 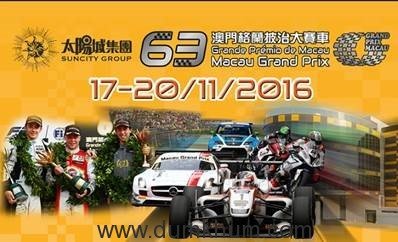 Recognized as the most internationally prestigious event on the local calendar, the legendary Macao Grand Prix is a motor-racing event held annually in Macao. It is known for being the only street circuit racing event, in which both car and motorcycle races are held. The event now edging into its sixth decade places the best motorcycles, WTCC and Formula 3 racers in the world head to head for a punching ride.

The high-pitched whine of racing engines, the roar of the crowd, and the adrenalin-charged atmosphere make for four colorful days of non-stop, head-turning excitement. The Macao Grand Prix is famously known as one of the most demanding circuits in the world. Built in 1954 the Guia circuit was originally made as a route for treasure hunts around the streets of the city. However, along the narrow, twisting Guia street circuit of Macao City, it was suggested that the track could host an amateur racing event for local motor enthusiasts. Ever since then the track has become a venue for both motorcycle and car racing events! The legendary Guia street circuit will be a visual spectacle with some of the best racers in the world pitting against each other for the cup.