Young talent to be developed by Celtic Football Club The Mumbai Leg of the third edition of the Mahindra Youth Football Challenge (MYFC), the country’s largest Under-14 School Football Tournament, will kick off on January 3, 2013 in the city of Mumbai.

After the runaway success of the second edition of the Mahindra Youth Football Challenge (MYFC), it’s time once again for top class football action from the leading schools and the playing field will be the City of Mumbai. The third Intra-City leg of this unique Under-14 Schools Football Tournament-cum-Talent Hunt will see more than 40 leading soccer playing schools from Mumbai competing amongst themselves from January 3, 2012 onwards to bag the honour of the “Champion School” of Mumbai. The Champion School of Mumbai will then lock horns with five other champion schools from Bangalore, Goa, Kolkata, Delhi and Kerala to decide the winner of the Mahindra Youth Football Challenge. While the Intra-City legs have already concluded in Bangalore, Delhi, Kolkata, Kerala and Goa.

MYFC is the Mahindra Group’s commitment to promote football at the grassroots level. The company has partnered with Scottish football giants, Celtic Football Club, who will take on the responsibility of training and developing young talent identified through the initiative. The MYFC initiative is being promoted and executed by leading sports management company, Procam International.

Interestingly this year MYFC has got on board 92.7 BIG FM the country’s largest FM network with 45 radio stations across the country as the official radio partner for this edition of the tournament.

“We are very proud to bring back the Mahindra Youth Football Challenge for its second year. We were humbled by the response we received for the tournament. With the talent that we identified at the end of the first year, I am glad to say that we more than achieved the objectives that we had set for the league, which was to identify and nurture talent at the grass root level. We hope to continue this in the second year as well,” Mr. Mufaddal Choonia, Deputy General Manager, Corporate Strategy of Mahindra & Mahindra, has been quoted as saying.

Speaking about the top-class event that will commence in the six cities, Vivek B. Singh, Jt. Managing Director of Procam International, said, “It is indeed a pleasure to be associated with a project that involves such reputed entities as Mahindra and Celtic FC. Procam International is committed to giving India’s junior footballers a professional playing experience, enabling them to focus completely on the task on hand, which is to play good football.”

India’s no. 1 FM station, 92.7 BIG FM continues to be the official Radio Partner for the MYFC.

Speaking on their association with the event, Pankaj Vassal, Regional Business Head, West and East, 92.7 BIG FM said, “It has been our endeavor at 92.7 BIG FM to reach and entertain audiences across the length and breadth of the country, impacting lives positively and we remain committed to doing that through all our initiatives. We are pleased to be associated with MYFC, which has been institutionalised to offer a platform to young footballers, who can be groomed to become specialists in the sport.” 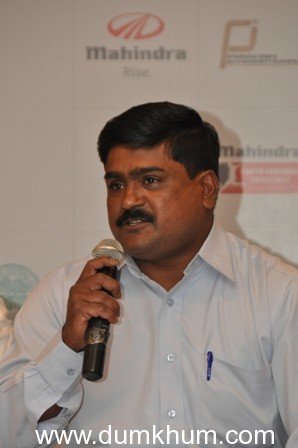 Former Indian Player Godfrey Pereira said, “I am extremely happy to be a part of such an initiative and firmly believe that football needs to be developed at the grass root level. With initiative such as these, our player can develop their skills at a young age and be exposed to international standards of the game thus improving the overall play of football in our country.”

The Mumbai leg of the MYFC is being conducted by the Mumbai School Sports Association and the matches will be played at the MSSA Ground.

A CHANCE TO LEARN FROM THE BEST: The winning schools from the six cities and their coaches will benefit from a four-day coaching camp to be conducted by a panel of visiting coaches from Celtic Football Club before the Inter-City Challenge. The same panel will then shortlist 22 to 24 players from the Inter-City Challenge who will undergo an intensive four-day coaching clinic, where two to four of the best players will be picked to travel to Scotland and Celtic Football Club for further intensive training.

The ten-day intensive coaching camp in Glasgow with Celtic Football Club will involve individual technique training, multiple sessions of Sports Science Testing, learning the right warm up techniques with the under-17 team, and daily coaching sessions with the Celtic Under-15 team. There will also be opportunities to watch Scottish Premier League Games at Celtic Park involving Celtic FC.

Celtic’s Chief Executive, Peter Lawwell added, “Celtic Football Club is delighted to continue its involvement with the Mahindra Youth Football Challenge for a 3rd consecutive year. We have been impressed with the standard of player and look forward to, once again, hosting this year’s winners at our Youth Academy as they learn what it takes to become a professional football player. We are very much looking forward to this year’s event and will do all we can to ensure that the Mahindra Youth Football Challenge continues to grow as the top youth football event in India.”

AWARDS AND ACCOLADES: There is plenty to play for in the Intra-City stage, with the winners from each city getting Rs. 30,000, the runners-up team, Rs. 20,000 and the 3rd placed winner Rs. 15,000. The teams that reach the last eight stages will be provided with kits, while the winners and runners-up teams will be awarded trophies with each player from these teams getting a kit bag. Similarly, there will be a ‘Star Performer of the Game’ trophy for each match from the quarter-final stage and ‘Best Player of the Tournament’ Trophy to be won.

Going ahead, the champion school of the Mahindra Youth Football Challenge will receive a cash prize of Rs 50,000, along with the winner’s trophy, while the runner-up team will win a cash prize of Rs 30,000 and a trophy. There will also be awards such as ‘Star Performer of the Game’ and individual appreciation trophies for the ‘Best Striker’, ‘Best Mid-fielder’, ‘Best Defender’ and ‘Best Goalkeeper’.

Each player from the six teams in the Inter-City League will be given two sets of kit (Jersey, Shorts & Stockings), while travelling, out of pocket expenses during the travel, and lodging & boarding of all the six schools will be taken care of by MYFC.

A USD 15.4 billion multinational group based in Mumbai, India, Mahindra employs more than 144,000 people in over 100 countries. In 2011, Mahindra featured on the Forbes Global 2000 list, a listing of the biggest and most powerful listed companies in the world. Dun & Bradstreet also ranked Mahindra at No. 1 in the automobile sector in its list of India???s Top 500 Companies. In 2010, Mahindra featured in the Credit Suisse Great Brands of Tomorrow. In 2011, Mahindra acquired a majority stake in Korea’s SsangYong Motor Company.

In 1988, with a vision to provide a more holistic spend to the advertising rupee and a burning desire to ameliorate the prevailing professional standards for sportsmen, Anil and Vivek B. Singh created Procam International. At a time when sports was considered the private domain of Federations, who ran it as their personal fiefdoms, two people dared to dream large dreams and stand up for what they believed in. Procam International is today a full-fledged sports management company, involved in the promotion of national and international sporting events, sports consultancy and Live television programming.

Procam has based its corporate philosophy on an open culture, with an emphasis on values and integrity, uncommon in today’s Machiavellian world. Procam has promoted and conducted over 45 world events in the last 23 years. These prestigious events have elicited player participation of the highest caliber, as well as huge public interest.

The Standard Chartered Mumbai Marathon, the Airtel Delhi Half Marathon and the TCS World 10K in Bangalore are three of the most prestigious distance running events in the world. They are accredited by the

This has established Procam International as the leading sports events creator in India. Its professionalism, attention to detail and dedication, has won it the faith of its sponsors and partners.