20 October 2014 – DDLJ enters the 20th year of its uninterrupted run at the Box-office! DDLJ, Aditya Chopra’s epic ode to love, is kick-starting its 20th year of uninterrupted run at the iconic Maratha Mandir in Mumbai! The National Award winning film changed the course of a nation’s cinema and became an unparalleled brand by catapulting itself into being The Longest Running Film in the history of Indian Cinema.

Since its release in 1995 this cult classic love story has won over the hearts of all generations for the past 19 years and is still watched by the youth even today, often playing to packed houses during its daily 11:30 AM show. It has been so strong an influence that it has in fact become a benchmark for all love stories!

As it enters its 20th year today, YRF is happy to announce that to celebrate the forthcoming inimitable milestone of DDLJ completing 1000 weeks of Timeless Romance on 12th December 2014, we are putting together several activities which will truly pay a compliment to, in Yash Chopra’s words, a “phenomenon that defies explanation’’.

Stay tuned for exciting times ahead for a film that is still winning hearts worldwide! 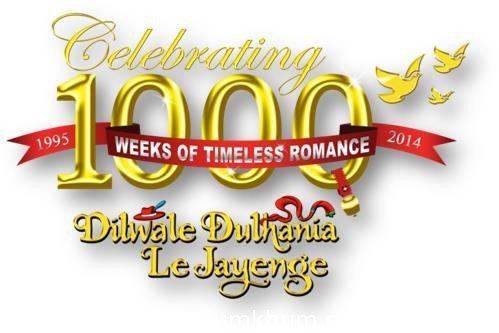