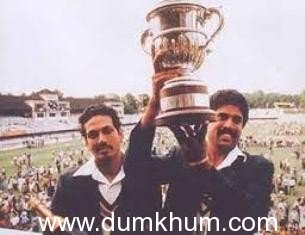 India’s first victory at the 1983 world cup will be made into a film and will be
produced by the founder-president of Celebrity Cricket League, Vishnu Vardhan Induri. Lahore fame Sanjay Puran Singh Chauhan will direct the film. The film will portray the story of Indian cricket team back in 1983 and how it became pride of the nation by bringing the world cup home.

An international casting agency will also be hired for the film. Source says “The film’s script has been finalised and pre-production work has already begun. They
plan to recreate the 1983 moments. The film will be a big project and the
makers are leaving no stone unturned to do justice to the story.”

The filmmaker now plans to meet the cricketers who played in the 1983
World Cup final in a proposal to add to the film’s accuracy. The source
says, “The film will be shot in those very stadiums where 1983 World Cup
matches were played. The final will be shot at Lord’s cricket ground in
London. It would be interesting to see on the big screen how Kapil Dev and
his men, including Mohinder Amarnath, Krishnamachari Srikkanth and
Balwinder Singh Sandhu, managed to win the tournament.”