17th edition of the Mumbai Film Festival will be held from 29th of October to the 5th of November 2015. 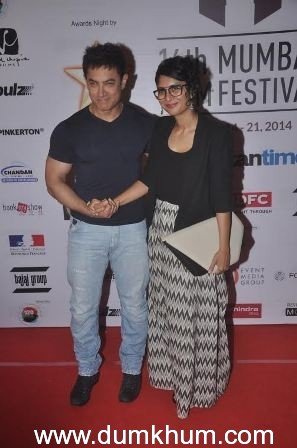 17th edition of the Mumbai Film Festival will be held from 29th of October to the 5th of November 2015, has new board of trustees who will put their expertise and experience together to bring you a bigger, better and even more exciting edition of the festival. With a total new and revamped look, this season the Festival has representation from the main stream Hindi Cinema along with the corporate participation to take it to a totally different level and raise the bar to match the International Standards.

Anupama Chopra is a film critic, television anchor and book author. She has been writing about Bollywood since 1993. Her work has appeared in publications such as The New York Times, Hindustan Times, The Los Angeles Times and Vogue (India).

Anurag Kashyap’s name has become synonymous with a new wave of cinema in Bollywood. His films Gangs of Wasseypur- Part 1 & 2 and Ugly screened in the Director’s Fortnight section at the Cannes International Film festival. He has also been on the jury of the Sundance Film Festival and the Marrakech Film Festival.

Donning multiple hats of actor, producer, director, singer and songwriter, Akhtar gathered a lot of acclaim for his directorial debut Dil Chahta Hai and for his performance as the athlete Milkha Singh in the biopic Bhaag Milkha Bhaag.

Producer, director and talk show host, Karan Johar is one of the most prolific Indian filmmakers who has brought a fresh and modern outlook to Indian commercial cinema through films like Kuch Kuch Hota Hai and Kabhi Khushi Kabhie Gham.

Vikramaditya’s debut film Udaan was part of the official selection at Cannes in 2010. His second film Lootera was highly acclaimed as well. He is the co-founder of Phantom Films.

Deepika is one of Bollywood’s most successful and popular actors. Her films such as Cocktail, Goliyon Ki Raasleela: Ram-Leela and Finding Fanny have been critical and commercial successes.

Riteish debuted as an actor in Bollywood in 2003 and has been part of many blockbusters. In 2013, Riteish gave Marathi cinema a fresh impetus by producing the acclaimed film Balak Palak and acting in the popular film, Lai Bhaari.

Under Anand Mahindra’s leadership, the Mahindra Group has grown into a US $ 16.5 billion organization and is one of India’s top 10 industrial houses with presence in sectors ranging from agribusiness to aerospace and automotive.

Ajay Bijli pioneered the concept of multiplex cinemas in India and has transformed the way the country watches movies with PVR Ltd, India’s largest multiplex chain with 454 screens in 102 properties in 43 cities.

In his role as the Managing Director, Siddharth Roy Kapur has led Disney India to great heights. Under his leadership the studio has produced and released universally appreciated films like Rang De Basanti, AWednesday!, Paan Singh Tomar, Barfi!, The Lunchbox, Shahid, Haider and Ship of Theseus.