Evening of 1st March, 2014 (Saturday) was long awaited by the Gujarati  entertainment industry fraternities. Because this is the only of its kind tradition of felicitation of around 55 Gujarati Film, Tv and Stage Artists every.  This year 13th Annual Transmedia Screen and Stage Award was organized at The Pool side of Tulis Star, Juhu, Mumbai. The evening of dark amavasya was glittering with grandeur and glamour of the event. In his speech, Shri Jasmin Shah said “Gujaratis are leading and progressive in almost all fields including Bollywood and Tollywood, but they are far lagging behind in Gujarati Film Industry. When we are entering to Teen age in this 13th year, every gujarati should be serious and sincere about the up-liftment of  Gujarati Film industry and should try to attract more and more youngsters to take interest, love and pride  for their Mother Tongue. Also we should think of Unity and a responsible strong Gujarati leader in Mumbai. Gujarat CM Honorable Shri Narendar Modi was present on the Satge of Second Annual Awards and From this stage of 12th Annual, I had declared my wish to have Shri Narendra Modi as our Prime Minister candidate , and it has come true now. I wish next year prime Minister of India Shri Narendra Modi will remain present on this stage to encourage Unity of Gujaratis.” 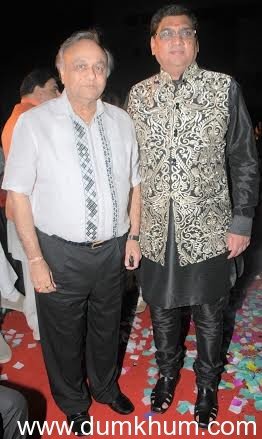 One and All had praised the Team Transmedia efforts fior the best organized event.