The Governor of Goa, Bharat Vir Wanchoo presenting the Golden Peacock award for best film to the East Timor Film ‘Beatriz’s War’ Directed by Luigi Acqisto, Bety Reis, at the closing ceremony of the 44th International Film Festival of India (IFFI-2013), at Panaji, Goa on November 30, 2013
Curtains came down on the 44th International Film Festival of India, IFFI on an emotional note, with tiny island nation East Timor’s first ever feature film “Beatriz’s War” winning the prestigious Golden Peacock Award for the Best Film. Directed by Bety Reis and Luigi Acquisto, the film is a passionate story of one woman’s conviction to remain true to the man she loves.  In her passionate acceptance speech at the closing ceremony held on the banks of River Mandovi in Panaji, Goa, Reis said “one of the world’s oldest and biggest film industries has reposed faith in the world’s newest and smallest film industry in East Timor. Since its independence in 1999, we have not just been fighting for the rights of women, the rights of children and the right to rule ourselves, but also our right to tell our stories” The award for the best film carried a Golden Peacock, a certificate and a Cash Prize of Rs. 40 lakh. Minister for Information & Broadcasting Manish Tewari and the Hollywood actress Michelle Yeoh presenting the Special Centenary Silver Peacock Award to Kamaleshwar Mukherjee, Director of the Film ‘Meghe Dhaka Tara’ at the closing ceremony of the 44th International Film Festival of India (IFFI-2013), at Panaji, Goa on November 30, 2013.
The best director award was given to Kaushik Ganguly for his film Apur Panchali, his tribute to stalwart Satyajit Ray. He received Rs 15 lakh, a certificate and a Silver Peacock. Secretary, Ministry of Information and Broadcasting  Bimal Julka presenting the silver peacock award for Best Actor (Female) to Magdelana Boczarska for the Film ‘In Hiding’, at the closing ceremony of the 44th International Film Festival of India (IFFI-2013), at Panaji, Goa on November 30, 2013.
Best Actor (Male) award went to Alon Moni Aboutboul for his performance in Israeli movie ‘A Place in Heaven’. Best Actor (Female) award was presented to Boczarska Magdalena for her excellent performance in Polish film ‘In Hiding’. Both these awards carried a Silver Peacock, a certificate and a cash prize of Rs. 10 lakh.
The special centenary award of IFFI  instituted in the 101st  year of Indian cinema, was handed to director Kamaleshwar Mukherjee of Bengali film ‘Meghe Dhaka Tara’ by legendary actress Asha Parekh. The film is a tribute to Bengali off-beat cinema master Ritwik Kumar Ghatak. The centenary award carries a cash prize of Rs 10 lakh and a silver peacock. 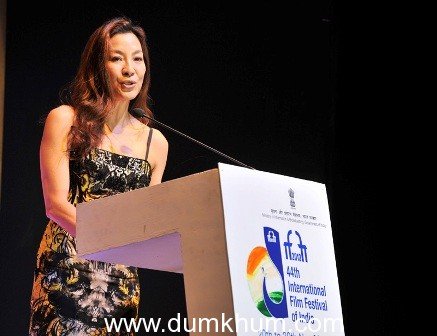 Hollywood  action star Michelle Yeoh at the closing ceremony of the 44th International Film Festival of India (IFFI-2013), at Panaji, Goa on November 30, 2013.
The chief guest Michelle Yeoh expressed delight at being part of the ceremony and among incredible moviemakers. “I congratulate you for the movies you’ve made, and the incredible stories you’ve told. It is truly my honour to be in this room” she said.
On the occasion Union Minister for Information and Broadcasting  Manish Tewari said that 44th IFFI was a celebration of freedom of the human spirit, liberated from the mores of conventionalism. Talking about the initiatives taken over the past one year, he said, the single window mechanism that the Ministry of Information and Broadcasting has put in place will help streamline the whole business of producing films in India. He said the same mechanism has been extended to domestic film producers as well. Mr. Tewari said the government had also taken the initiative to replace the archaic Cinematograph Act with a completely new legislation, the draft of which is on the Ministry’s website for public consultation.
Justin Chadwick’s film ‘Mandela: Long Walk to Freedom’ was the closing film of the festival. The film chronicles Nelson Mandela’s his life from his childhood in a rural village to his emergence as the first democratically elected President of South Africa. Remo Fernandez performing at the closing ceremony of the 44th International Film Festival of India (IFFI-2013), at Panaji, Goa on November 30, 2013.
Earlier, Goa’s noted singer Remo Fernandes enthused the 2,000 strong audience with his performance ranging from his popular Hindi film numbers of ‘Hamma Hamma’ to a rendition of one of his classical Indian compositions.
With this the 11 day extravaganza of films, master classes, discussions and press conferences on films came to an end. A total of 325 films from 76 countries, which included 15 Oscar nominees, were screened during the festival.
PIB/CP/MD