HELLO!, India’s  leading celebrity and luxury lifestyle magazine, and the RWITC came together to host the annual HELLO! Classic Cup race at the Mahalaxmi Race Course in Mumbai. The HELLO! Classic Cup is considered one of the most awaited racing events of the year. Well known for its high style quotient and entertainment value the HELLO! Classic Cup is sought after not just by the crème de la crème of society but also by racing aficionados. And just like the last five years, this year too, it was a high-octane extravaganza as Mumbai’s stylish fashionistas glided in-to cheer and bet on their favourite horses.With their sights set on the racetracks, enthusiastic more than ever, the glitterati showed up in their Sunday best over​ a charming high tea with tiers of delectable tea time indulgence​ till sundown. And to add to the thrill and excitement, HELLO! gave away luxury prizes to the various winners. Who better than the Indian film industry’s finest style diva to do the honours at the Hello! Classic  Cup? Actor Ileana D’cruz was the chief guest and presented the winning trophy Hello! 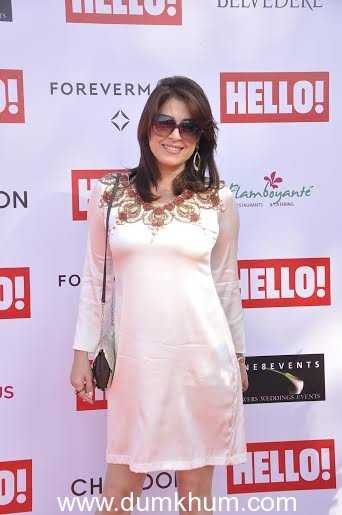 About HELLO!, The world’s No. 1 Celebrity Magazine:

Since April 2007, HELLO! has successfully covered the glamorous world of famous personalities, royalty and film stars. Armed with the strong reputation of being one of the world’s leading celebrity magazines, HELLO! is invited into the palaces and homes of some of the most elusive royal families, movie stars and celebrities – to get the view from inside.

The result: intimate and insightful interviews that attract a growing family of discerning and dedicated readers month after month.